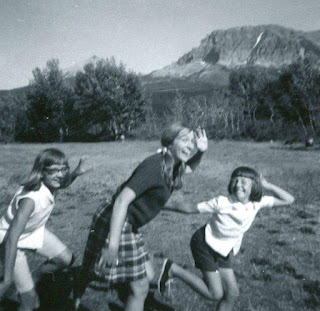 francis schuckardt did his best to convince us that 99.9% of us were meant for the religious life.  Very seldom would God direct any of us to marry.  So, considering that, my sister, Aggie, attended a retreat over the summer of 1972 that was for nuns and brothers and those thinking about entering the convent or seminary.  Lots of teenage boys and girls attended.  Why wouldn't they?  They  were in fear of eternal hell fire if they didn't answer the call of the Lord.  I missed my sister while she was gone for that long week of isolation, prayers, and endless talks by schuckardt.  She filled me in on all the details after she got home.  She didn't say anything about becoming a nun.  I was relieved.  Knowing that I would soon be leaving for a mandatory week long seminar of my own, she gave me this advice:  "Francie, if you want to get ready for the Seminar, this is what you do.  You get some sand, and you sprinkle it all over the floor.  Then, you practice kneeling on that for hours a day."  I knew she wasn't kidding.

The Espiritu Seminar, as it was called, was mandatory for any teenager planning on attending "school" in Coeur d'Alene during the upcoming year.  The irony was that, in advance of the seminar, we were all made to write an essay entitled, "Why I Want to Attend the Espiritu Seminar".  These had to be submitted to the Grand Poobah himself, well in advance of the end of August event.  I know that I wrote what was expected:  "I want to attend this seminar, because I am a wretched sinner.  I need to do penance for my sins."  I was 14 years old.

The last week of August, my mom drove me to Coeur d'Alene .  We got all the items I'd need for the week, which wasn't much, shampoo, toothpaste, soap.  The seminar was held at a place in Twin Lakes, Idaho, called TwinLo Camp.  It was a beautiful spot on the shore of one of the lakes.  There were quite a few cabins, where we would sleep.  There was a cafeteria where we would have our meals.  And, then, there was the chapel/meeting hall, where we would spend most of our time.  Mom dropped me off on a Sunday afternoon, and I was pretty excited.  I wasn't sure what to expect, except for a lot of sand on the chapel floor!  I am glad now for that one time lack of knowing what the week would be like.  I wouldn't have that luxury in the years that followed.

They say ignorance is bliss.  In this case, that is true.  After my mom left, I stood with the rest of the girls in their long dresses and veils covering nearly all their hair.  The boys also waited - way far away, across the camp.  The nuns & brothers were careful to keep a lot of distance between the sexes.  Now, we waited to be told which cabin we'd been assigned to for the week.  There were about 8 cabins for the girls, and I have NO idea how many for the boys.  Most of the nuns were pretty cool to have as a cabin counselor.  But, you were REALLY lucky if you were assigned to the cabin where Mrs. Brazill was in charge.  She was a spunky little thing, and lots of fun.  She appeared to believe in the things schuckardt taught, but she was upbeat and always, always happy.  I wanted to be in HER cabin.  But, as fate would have it, I was put in the cabin that was the most dreaded of all:  Sr Mary Anne's cabin.  Sr. Mary Anne was hell on wheels.  She was mean.  I figured that I would just play it cool, follow the rules, basically keep my nose clean and all would be fine.  Right.

The Espiritu Seminar ran Sunday - Sunday.  The day went something like this:  Rise.  Get dressed.  Go to chapel for morning prayers and Mass.  This would take probably 90 minutes or so.  All the while, you could smell the breakfast that the wonderful camp cook was preparing across the way.  After we were let out of chapel, we were made to line up in lines, 2 by 2, and walk with our eyes on the ground, and in total silence to the cafeteria.  When we got there, we would stand by our place in silence, not glancing around, until schuckardt or one of his cronies would lead us in grace.  Then, again in total silence, we would sit quietly and eat while someone read aloud from a previously chosen book on the spiritual life.  More times than not, the book from which they read was one called:  Preparation for Death.  It was written by some holy author and went into great detail his interpretation of what happens after a body dies.  Decay.  Maggots.  Just the kind of thing a teenager wants to think about at anytime, let alone when eating breakfast.  After breakfast, we cleaned up and headed to the lecture hall.  One after another speaker would get up and preach to us about the horrors of the world in which we lived.  We heard all about how our country would be divided into 8 different sections, each section assigned to a different culture from ours, with the intention of inflicting the  utmost pain upon us, hoping to cause us to give up our Faith.  Of course, when that happened, Satan would swoop in and take our souls to the eternal fires of hell.  He also made a point of instilling even more fear into us by telling us that the Pacific Northwest had been given to the Manchurians, the cruelest of all ethnicities.  Once a day, we'd have a quiz on the lectures of the day.  If you got 100%, your name would be written up on a giant chalk board.  (Bernie's name was always up there, smarty pants.)   Once a day, we were allowed to 'recreate'.  For the girls, that meant we could visit, or we could play volleyball.  I sat on the sidelines, all by myself.  I really felt lost.  One day, 2 girls walked over to talk to me, and to this day, one of my dearest friends is that girl, Lucy.

We prayed and we prayed and we prayed.  And we listened, and listened, and listened.  In the evening, we would again go to chapel for more long prayers.  If any transgressions had occurred that day, schuckardt would rant and rave about it.  Transgressions?  Well, one day it was raining and we had to meet in the cabins for our recreation.  In Mrs. Brazill's cabin, they were playing charades.  Some of the girls got it into their heads to do a charade of Mary Magdalene.  So, while Mary laid on the bed, various girls acted out lots of people getting into and out of bed with the sinner, Mary Magdalene.  I remember thinking it was a pretty clever act.   Apparently, somebody had a qualm of conscience and reported it to schuckardt, and boy!  did we hear about it that night.  Anyone involved got a special punishment.  I don't remember what it was.

After prayers in the evening, we'd file back to our cabins 2 by 2 in complete silence, heads down.  We'd wait in line to use the bathroom, and then go back to our cabins to wait for more prayers before bed.  I remember one night kneeling beside my bed, eyes closed tightly, hands folded to my chest, praying along with everyone else, when out of the blue a hand slapped me hard across the face.  My eyes flew open, then immediately shut for fear of getting slapped again.  It was my cabin counselor, the dreaded, MEAN Sr. Mary Anne.  She never said a word.  After the slap, she just walked away.  To this day, I have no idea what provoked her.

The Seminar concluded after a week.  I had survived.  My mom was there to pick me up, and I remember just hugging & hugging her so hard and crying and telling her I loved her.  I was so glad to be done with that week.  I think it is the most precious moment that I EVER shared with my mother in my entire life.  If only.....